The landmass on which Antonica lays has been called many names throughout history, but it owes its current name to Antonius Bayle I, the Great Unifier, the founder of The City of Qeynos and ancestor of the current ruler of Qeynos, Antonia Bayle.

The history of Antonica is entwined in perpetuity with the Bayle lineage. Whether through malice or good intention, ever since Bayle the Ethernaut the land of Antonica has been defended by a Bayle. Antonius I, the son of Vallius Bayle, son of Bayle the Ethernaut, was born in Oceangreen, the settlement on which modern day Qeynos resides. When he came of age he embraced destiny and began his famed unification of the outlying human communities into a unified force. Through strength of will, Antonius I transformed Oceangreen into Qeynos and began to expand the kingdom across the continent.

At this time the land currently known as Antonica was merely a part of a much larger landmass known to the other races of Norrath by its elven name: Tunaria. But as the power of Qeynos and the Bayles grew, as did their fame. Soon the area surrounding Qeynos began to be referred to as the Qeynos Hills, or as Antonius Bayle II preferred: Antonica. Alas, conflict and war would stunt the further conquest of the Qeynosian empire and the Bayles' expansion was ground to halt.

Then, during the reign of Antonius Bayle V, The Age of Cataclyms occurred, leading to the eventual shattering of Tunaria into separate continents. The western continent containing the Qeynos Hills fractured and either due to the simplicity of it's name or the synonymy of the Bayles and the land in which they came to represent, unanimously came to be known as: Antonica. 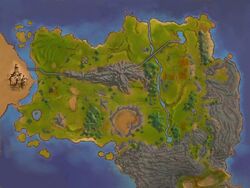 The main sources of transport across Antonica are the Griffin Towers that dot the landscape as well as the renowned Qeynos Highway, which offers a direct route between all the main commercial and quest centers.

To refer to Qeynos as a town is like to refer to a lion as a cat. The magnanimous city of Qeynos is located at the west end of the zone. Direct bridge connections lead from Antonica into Qeynos Capitol District at either North Qeynos or South Qeynos. Evil-aligned players can enter The Peat Bog, a bordering zone of Qeynos, via the moat on the city's perimeter.