The hum caught Phelan's attention. A low, barely audible thrumming sound that penetrated his sleep. Waking was always one of his least favorite activities, so he lay still for some time, drifting in and out of slumber. Still, the hum was insistent. Annoying. He finally sat up with a bitter grumble.

"What is going on around here?" he demanded of no one in particular. This trip to Bobick's Village had been particularly stressful. No lodgings anywhere near the dock, and he certainly wasn't going to take his chances in Rivervale. After glancing around, he decided to sleep beneath the wooden planks and trust to the local deputies to keep him safe.

"Would have gotten more rest, too, if not for that dratted Kelbri hollering at anything that moved," he muttered, glancing at the halfling who had likewise taken shelter beneath the docks.

"Morning!" she called to him, cheerfully unaware of having darkened his sleep. "Are you going to help them, then?"

"Help? Them who?" Phelan asked, splashing water onto his face. He dried off with the back of his hand, then pulled out a skin and waded out to fill it from the cooler water further from shore.

"The Erudites," Kelbri said. She offered Phelan some dried fruit, which did quite a bit to undo his irritation. "They've gone over toward Fae Island . I've never seen so many of them. Dozens of them! Who knew they could carry as much as they had? Supplies, boxes, crates ... I have no idea what they're doing."

"Is that what makes the humming, then? Dozens of Erudites whistling while they do their tasks?" Phelan packed his bedroll and secured it. He grinned at Kelbri and said, "Erudites can be pretty sturdy folk, despite their appearance. They used to be humans like me, you know."

"Oh, I meant nothing by it," Kelbri replied, blushing. "It just seemed odd, you coming and then all of them showing up. A coincidence."

"I might go see what they're doing," Phelan said, hoisting his pack. "Nothing better to do. Boxes and crates, you say? Maybe they need a carpenter. That's my trade."

Phelan followed the shore toward Fae Isle. It didn't take long for him to see them, though the humming was no louder than it was before. As Kelbri had said, there were dozens of Erudites chanting or busily unpacking heavy crates and setting up tables. He frowned. Who had taught them to put together a work bench? It was much too close to their forge. Why, anyone could see that someone planing lumber here would be asking for trouble.

The leader of the group stopped in mid-chant and appraised him. "You are a hunter? Or perhaps have some other skill?"

"I'm a carpenter," said Phelan. "What are you doing out here? I hope you're constructing an inn; this place sorely needs one."

"We are not building an inn," the leader replied somberly. "We are Gate Callers, students of the lore from times long ago. The names Al'Kabor and El'Arad are doubtless nothing to you, but to us, they were holders of truths and mysteries that we are about to reforge."

"Al'Kabor..." Phelan furrowed his brow. The name sounded familiar, but he couldn't remember where he'd heard it before. "I'm looking for work; do you need a carpenter or not?" he said at last.

"Speak with the Supply Master," said the Gate Callers' leader, inclining his head toward the Erudite holding that title. "Your skills will be highly useful to us in our task. Our goal is to travel to the new lands of the Overrealm. We are rebuilding the Spire that once stood in this place."

"The Spires," said Phelan, blinking. "But... the Spires were destroyed..."

"Our research is complete," replied the leader. "All that is left is the execution. With these Spires restored, we shall be able to access the Overrealm. Do you still wish to help?"

Phelan looked at the array of equipment scattered about. These Erudites were obviously well-provisioned. He might even convince them to build temporary shelters. The Spires would mean traveling in the blink of an eye to distant places. No inn in the Enchanted Lands? No problem! Just head to the Spire and go right to the Overrealm! There were bound to be accommodations in the new lands.

"I'm in," Phelan said. He dropped his pack at the foot of a tree and headed toward the Supply Master to get his name on their roster.

As he walked away, the Gate Callers' leader smiled.

The Gate Callers, an ancient order of Erudites, have returned to restore the power of the Ulteran Spires. Seek out the order's lead scholar to offer assistance in Antonica, the Commonlands, the Thundering Steppes, Nektulos Forest, the Enchanted Lands or the Feerrott. 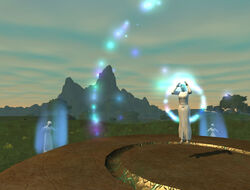 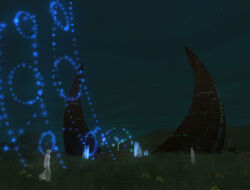 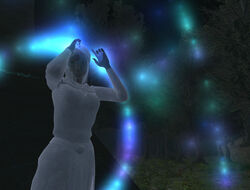 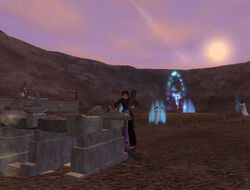 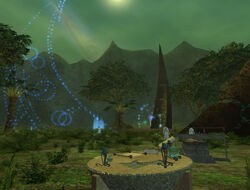 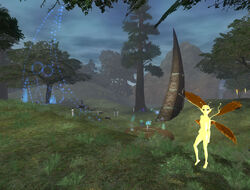 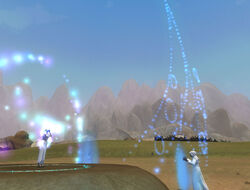 Retrieved from "https://eq2.fandom.com/wiki/Answering_the_Call?oldid=40111"
Community content is available under CC-BY-SA unless otherwise noted.